Why Is the FDA Attacking a Safe, Effective Drug?

Yes, Why? If you really want to know go to Fox Nation, Tucker Carlson and watch the 58 minute interview with Dr. Bret Weinstein. Then recall Deep Throat's Great Proverb, "Follow the Money" 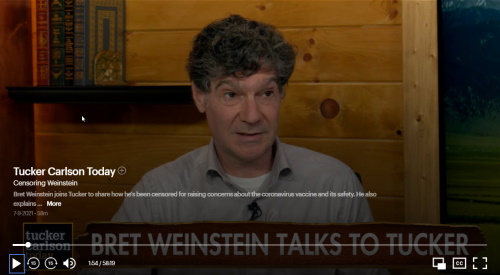 Who is Bret Weinstein? Ph.D., Biology, past professor of evolutionary biology and researcher. His wife also has the Ph.D., and shares in Bret’s research work and now video production work. Bret and wife, changed careers abruptly in 2017 from teaching biology at a small liberal arts college (see Tucker Carlson interview) to doing podcasts and interviews on the youtube.com platform in a widely watch podcast called The Dark Horse.

But during one video podcast on youtube.com, Bret evidently stepped on youtube’s toes which must have been pocked, pitted and marked with pustules from corns and blisters for them to react in such typical harsh Soviet fashion by “cancelling out” the offender of the party line, erasing his photo from the youtube billboards now using photoshop and “de-platformed” him, thus reducing his income by near half. In other words, they made him walk the plank and went ahead and pushed him off into the water.

What did Bret Weinstein do to deserve such Stalinist tactics? He dared to mention and even had the gall to opine that Ivermectin was a viable early treatment for Covid-19. That was too much for the politburo residing in the towers of Googelgrad. So, the diktat went forth, put a mask on that bastard – erase him from the party records, blot out his picture from all future history books, he has violated our most sacred party rule – Thou Shall Not Deviate From the Party Line and the party line forbade any mention of the forbidden Ivermectin treatment. He dared to speak his opinion, as though he were in some land other than Googelgrad.

In fairness to youtube, they do have a lot of viewing material on Ivermectin now. I recently downloaded over 75 separate videos dealing with Ivermectin by established medical experts.

(Being medical experts does not mean that they will all have the same opinion. It simply means that they have the qualifying credentials, usually academic, to voice an intelligent opinion based on their own learning and study. But others with the same set of credentials will often arrive at different conclusions.)

So, what experts do we follow? If science were “settled” whether medical, climatology, physics or what have you, then it would not be science. Science is dynamic, it is constantly moving. It is evolutionary in its essence in that as new knowledge replaces or modifies old knowledge then the old and the new all become new knowledge. And in that sense knowledge is evolutionary.

I think, therefore I know I am, but I also know that Google, Youtube, and Twitter with its bird droppings have hurt themselves with their policies of censorship for the masses. Their behaviors have given strength to the alternative sources such as BitChut, Rumble, to mention only a few of what is developing in internet universe. And I suppose one should include Facebook. But since I have never used that medium I cannot comment.

In this land of continued Liberty, let us hope, I think censorship of pornography, rudeness, promotion of violence, attacks on the sensibilities of other countries and peoples is perhaps justified. But in America to censor ideas? and information regarding legitimate alternative medical treatments, etc., is precisely what you had in the old Soviet Union, especially the pre-Gorbachev era. Is this now come to America? I sure hope not – hope not for the next generation to follow us.

Google Search, Translate, Youtube, are such tremendous tools to help the masses. On just youtube.com a person can learn as much about computer programing, science, network security, basic medicine, engineering, calculus, about whatever you want – as you would get from any undergraduate degree from a college. You don’t have to go to a status university or even a state university to get a solid knowledge in the above areas. And any ambitious high school student can do college placement work via youtube, Khan Academy and Google Search. So, why tarnish the reputations of those who create and produce such wonderful tools by such un-American activity as unfounded censorship.