Note: This page is under development. It will take a few days to complete everything. But as work is finished it will be uploaded. If you appreciate the work conveyed in this website you can express that appreciation by donating to Dr. Geert Vandeen Bossche, Dr. Robert Malone, Dr. Peter McCullough, Medical Philanthropist Steve Kirsch so that he may expand the medical research and doctors that he currently supports, and many others who are contributing to the efforts to bring you the truth and to rid the world of this new MEDICAL TYRANNY before it is too late. 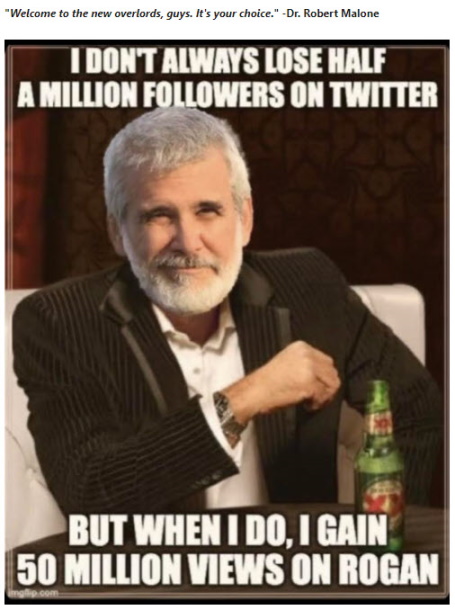 The one-two punch of Dr. Peter McCullough and Dr. Robert Malone appearing on the Joe Rogan Experience over the last few days of 2021 is generating earthquakes and tidal waves. A few days ago, McCullough's interview [ and here ] was already the most viewed podcast of all time, with 40 million views. I suspect the pair of these could shoot far past 100 million in the upcoming days.

That's exciting. It means you're not alone. Far from it. That's hope.
by Matthew Crawford, <roundingtheearth@substack.com>

And see for yourself Dr. Sanja Gupta wet his pants when he takes on Joe Rogan (obviously no match).

And who can ever thank Dr. Bret Weinstein enough for bringing Dr. Robert Malone, MD. and Medical Philanthropist and MIT Engineer and Inventor Steve Kirsch  [ and here ] [ https://en.wikipedia.org/wiki/Steve_Kirsch ] together on Bret's Dark Horse Podcast bringing awareness to millions of people world wide of the threat to humanity of these genetic experimental "vaccines." Often great people choose to sacrifice for what they believe in, their convictions. It cost Dr. Weinstein his job and income as he was "de-platformed and cancelled" by Google's Youtube for speaking the truth. Remember that the next time you use a search engine. There are now better alternatives to GoogleSearch, such as Duckduckgo.com, Bing.com and others; and to video sources such as Rumble and Bitchute and others.

Freedom to the Masses From Medical Tyranny

Note: This is an editorial opinion and does not or is not known to express the ideas of Dr. Robert Malone, Joe Rogan, Dr. Peter McCullough or any of the other people mentioned on the webpage. And its conclusion that the government, big tech, big pharma and others are engaged in Medical Tyranny is a personal opinion of the editor of this website. He is exercising his freedom of the press as given to him by the constitution.

It is very hard to suppress the truth and a people's movement. First Gutenberg revolutionized the spread of information with his invention of moveable type. (But to be fair, the Chinese had actually invented this technology many centuries earlier. But it had not reached Europe at the time of Gutenberg, 1450 AD. Then over the years came rapid improvement in typesetting technology and economic production of paper in mass quantity. By the 19th century millions of books were being published each year. But publishing a book is a cumbersome and time-consuming process.

During the American revolution period the " pamphlet" was "invented". This pamphlet became another "tool" to spread new ideas in an economical way and at very low cost. It was widely used to precipitate and support the Bolshevik Russian Revolution. But even a pamphlet can be suppressed. And so can radio transmission. Then in the 1980s while exiled to France, Imam Ayatollah Khomeini, of the Shia sect of Islam, advanced his ideas and movement through use of the small cassette tapes. Clever! By this process he overthrew the tyrant, the shah, king of Iran, and puppet of the United States, - Mohammad Reza Pahlavi. The cassette did it and the way Pahlavi treated his people and the use of his personal gestapo, the Savak, did it. But cassette tapes were still a slow process. Then came the wide use of the xerox machine and it entered the old Soviet Union. The Russian people now had a very fast way to spread new ideas and information and by this vehicle expanded the people's dissatisfaction with the Soviet economy, and lack of consumer goods and other issues. The "yearning for freedom" was not the "spark" that ignited the bloodless new revolution. The claim of the people's "yearning for freedom" was American propaganda.

What allowed the bloodless revolution to happen, the non-violent revolution was that Mikhail Gorbachev refused to order the military or police to fire bullets into the crowds of his own people. For that he should have been awarded a Nobel Peace Prize but he was not because he was a Russian. Had Yuri Andropov not died earlier of kidney failure while in office - things would have turned out different as they did for Hungry. But this is all an aside to what is happening now - the "new" cassette player is the internet. The internet has NOT been shut down, though it could be technically. And there are just a few major "hosts" such as Spectrum, Comcast, etc., who could selectively censor disagreeable website, at least disagreeable to the current government and to the pro-forma presumptive president. But to do so would create a lot of noise and perhaps make it onto the evening news.

So, what I am saying is that the giant dam of the mass media, such as cable tv, news' papers, big tech giants such as fakebook and twatter, etc., this dam is starting to leak. And anyone who knowns hydraulics and the extreme pressures on the high side of a dam knows that once the leaks start happening the erosion of the concrete is very fast. And when big money, such as that of Steve Kirsch is agitating the waters - then it is only a matter of time before the whole dam thing busts wide open.

Yesterday Steve Kirsch posted the autopsy and pathology report of Dr. Sucharit Bhakdi, M.D. & PhD (microbiology and Virology) and Dr. Arne Burkhart, M.D., both very prominent German medical scientists. Now the Surgeon General of Freedom loving Liberty Florida will become aware of the true magnitude of the pending calamity that these experimental genetic altering mRNA "vaccines" will cause his children and grandchildren and the children and grandchildren of the citizens of Liberty Florida.

So, sit tight in your chair as though you were in the movie house once again (most now closed due to "flattening the curve" which only flattened millions of jobs and businesses - on purpose) - and watch the show unfold.

The new theatre IS the internet. It is the xerox machine. It is the cassette player. It is the pamphlet. As all this is a monstrous medical crime - I hope they, the people's courts of Justice, apply the greatest medical invention to treat and permanently cure medical monsters who brought this crime about. That magnificent invention of Dr. Joseph-Ignace Guillotin, M.D. 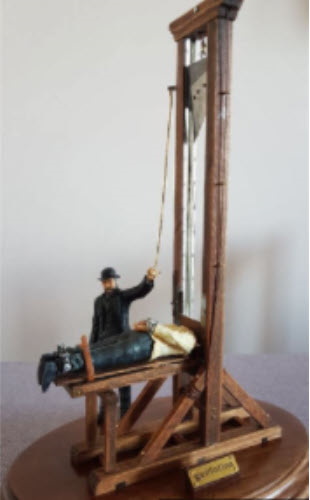 Any way you look at it - it's good French engineering.

Note: This image is intended only as a visual metaphor and nothing more. The vaccine.net advocates peaceful protests and non-violence and the ballot box to bring justice to these medical monsters, a personal opinion held by many others.

Dr. Robert Malone is the inventor of the nine original mRNA vaccine patents, which were originally filed in 1989 (including both the idea of mRNA vaccines and the original proof of principle experiments) and RNA transfection. Dr. Malone, has close to 100 peer-reviewed publications which have been cited over 12,000 times. Since January 2020, Dr. Malone has been leading a large team focused on clinical research design, drug development, computer modeling and mechanisms of action of repurposed drugs for the treatment of COVID-19. Dr. Malone is the Medical Director of The Unity Project, a group of 300 organizations across the US standing against mandated COVID vaccines for children. He is also the President of the Global Covid Summit, an organization of over 16,000 doctors and scientists committed to speaking truth to power about COVID pandemic research and treatment. 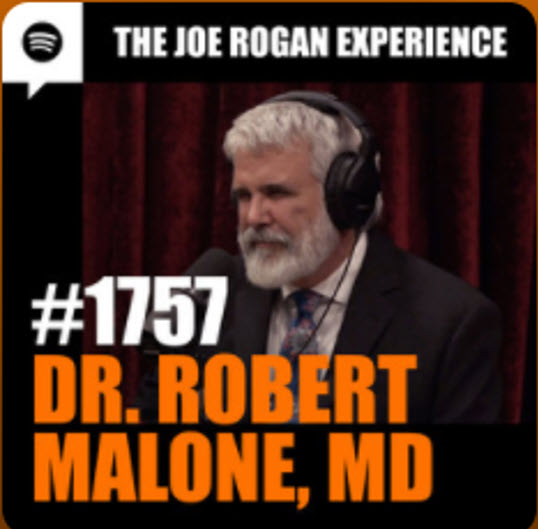 He Came, He Saw What Needed to be Done, He Conquered Our Common Enemies - Liars

My people are destroyed for lack of knowledge, Hosea 4:6